Coinciding with the 25th anniversary of the Convention on the Rights of the Child (UN, November, 20th 1989), since 2014, ACIM implements its Program: RIGHTS IN ACTION, as an integral strategy for the dissemination and promotion of the Rights of Children and Adolescents, and the promotion of good treatment.

The goals of RIGHTS IN ACTION program are:

– To promote knowledge and the real and effective access of children and adolescents to their rights.

– To contribute and promote awareness about these rights and about the joint responsibility in its defense.

– to carry out a generic prevention of any type of abuse.

– To raise awareness about the dimensions of the vulnerability of children and adolescents and about the need to promote their protection and personal development.

• Workshops in schools, addressed to children, adolescents and teachers.

• Conferences and forums in collaboration with other entities (parents, neighbors, women, and the elderly).

Who can benefit from these workshops?

• Schools, different organizations and associations working with children and adolescents.

• Parents, educators / as and / or referents.

• Teachers and professionals working in the field of childhood and adolescence.

For more information about our workshops, you can send an e-mail to: 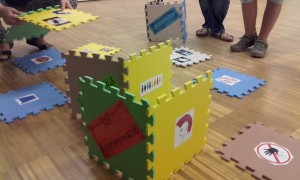 The Interdisciplinary Working Group as Methodology

Faced with the challenges posed by the defense of the Rights of Children and Adolescents, ACIM coordinates composed of professionals from different areas and services, both public and private, in order to jointly address the various issues, promoting study spaces, discussion groups, development of new tools and adequate performance, and design advocacy strategies.

Started in December 2013, on the understanding that the exploitation of children in the context of conflict breaks partner is a type of child abuse by its particular merits special attention and, above all, new strategies for prevention and awareness, both at the general public and professionals involved.

During the first stage, forming the group and preparation of working papers, between December 2013 and January 2015, they were held eight interprofessional meetings along which and from joint reflection, different documents were prepared work (tables ratio areas and services involved; ratio based on prevention, detection and intervention in each case, services, operations and relations / derivations among them indicators of specific risk factors protection, etc.).

Besides the lack of statistical information on these types of situations, insufficient mutual understanding between services and professionals involved was found, which necessarily derives poor coordination between them, which in turn affects responses are not always appropriate to the situations conflict and its consequences on the personal development of children and adolescents involved.

Thus, the objectives marked the group were defined in:

Knowing the different services, public and private, and independent professionals working in situations of marital conflict, both the parents and the children / as, and to know how these services and professionals interact including: coordination, referrals, and information they have each other.
Identify indicators of risk and protective factors of this specific type of child abuse, and its perception in different areas (health, legal, social services and education).
Identify and propose strategies for awareness and prevention, aimed at both professionals and the general population.

After the phase of preparing documents and definition of objectives, the Group stage presentations began. In this sense, we wanted to take this opportunity not only to publicize the work done, but also to promote joint reflection on all aspects offered by the question under consideration, while collecting the views of the different professional fields called to intervene.

To reach the largest and most diverse number of professionals, these meetings were held in different parts of the country: Barcelona, ​​Lleida, Tarragona and Girona.

The final document was approved in April 2016. Click here

WG on visible and invisible violences at school

An important part of the work carried out by the Catalan Association for Abused Children -ACIM- developed in different schools, colleges and institutes that demand some workshops through which run the programs and Rights in Action Open or the eyes . Thus, we reach children in primary and secondary school students, their teachers and families with our message of awareness and promotion of children’s rights and prevention of specific types of child abuse, such as those associated with the misuse the information and communications technology.

From the site that allows the delivery of these workshops and lectures, as well as the development of the program hosts more personal experience and professional members of the organization often makes contact with conflict situations, but different levels of conflict always linked to violent forms of relating, or, put another way, the various expressions may assume violence in relationships that occur in the school environment, either peer with the participation of adults and even from the institutions and / or administrations.

As an organization that since 1988, and from the perspective of different disciplines, working in defense of the rights of children and adolescents, actively combat abuse and promotes good relations, we think about the best we can assume that function before this reality.

From this starting point, collaborative spirit and commitment as always by networking, April 13, 2016 started the Working Group on Violence visible and invisible at the school level, with the aim reflect, develop proposals and action strategies, collect and disseminate good practices.

The Working Group, composed of 29 professionals from various fields related to childhood and adolescence (and most schools in the world), has developed a series of work sessions monthly. And now the WP is in full stage of reflection and exchange of experiences.